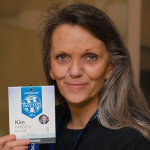 I have been involved in the WordPress community for about 6-7 years, and I’ve always been impressed with the people that I’ve met. Coming from a .NET programming background, the WordPress community could not have been more different. I’m not bashing on .NET, it’s just that with the advent of social media, specifically Twitter, I’ve received more help in this community than any other I’ve been part of in my professional life. I could list many a story on how this community has raised money for folks wanting a new computer, needing medical care, and at one point helped buy a person a house.
A friggin’ house, y’all.
Yesterday, I got the news that a WordPress colleague, Kim Parsell, had passed away. The how and why are not important. The point is that WordPress has suffered a huge loss. I don’t know when I followed Kim on Twitter, but it’s been years. She was given the nickname WordPress Mom, shortened to a hashtag #wpmom, because she genuinely cared about others. Her maternal instincts would make sure that Jan ate lunch. She would remind Andrea to get up from the computer for a few minutes during the day. She repeatedly reminded me that it’s a bad idea to tell my customers to “go shit in a hat”.
I finally met her at WordCamp Baltimore in 2012, and to be quite honest, at first, she kinda bugged me. Jesus, she could talk! About anything, and everything. I remember her being interested in almost everybody, and having that camera of hers either in her hands or around her neck at all times. She took some amazing photographs. At some point on that Saturday, she went from being annoying to endearing. I enjoyed hanging out with her that day, and looked forward to seeing her again. I figured BFE, Ohio isn’t that far from Baltimore, so we’d see each other again soon. Welp….
I could sit here and type how her passing made me lose my shit during the football game yesterday, or how I dreaded going to work this morning…knowing that I’d be on Twitter and be reminded about her death all day, crying into my keyboard, trying not to let coworkers see. But this post isn’t about me. This post really isn’t even about Kim’s passing so much as it’s about how awesomazing the WordPress community is.
At 2:37pm today, I saw a tweet that Kim’s son, Gary, needed some help.

Hi everyone. This isn’t the sort of thing I normally do, but with the recent loss of my mom, I am having to postpone the starting of my new job and money is running very thin. I would appreciate any help you could give to help me pay my bills while I grieve for the loss of my mother. Anything you can give is appreciated. Thanks, Gary Thrasher #wpmom #mymom

I clicked the link and saw something that made me lose it again right there at my desk:

At the time of this writing, 29 people have donated $1,760 in four hours.
Go ahead and wrap your brain around that.
My long-winded point to this post? I’ll miss the hell out of #wpmom, but I have never been more proud to be associated with a community like I am with WordPress.  I’ve seen the wagons circled in support of folks when their code is stolen, pirated, or their copyrights infringed. This is the first time I’ve seen the WordPress folks circle their wagons on a personal level (as it happened). Seeing a community come together for #wpmom’s son made my heart melt.
To anyone and everyone in the WordPress community that has reached out and helped a colleague, thank you.
I’m convinced Kim is out there somewhere, looking down and appreciating what you are all doing….
Unless she’s talking St Peter’s ears off at those gates 😉